How can we help you today?

What is a Polarity Conflict during Gerber Import?

started a topic over 3 years ago

Typically when the first object of a Positive Gerber file is "clear" it can assumed the intent of the file was to be a negative Gerber file (i.e dark background with clear objects - such as in ground, power plane).

Truthfully it's bad practice for a PCB CAD tool to output clear objects at the beginning of a Positive Gerber file as they will be invisible and have no effect on the final image.  Typically when a CAD tool outputs Gerber files that begin with "clear objects" the intent was to be a negative layer (as described above), and this detection by FAB 3000/DFM Now has helped many people correctly process their gerber files for manufacturing. 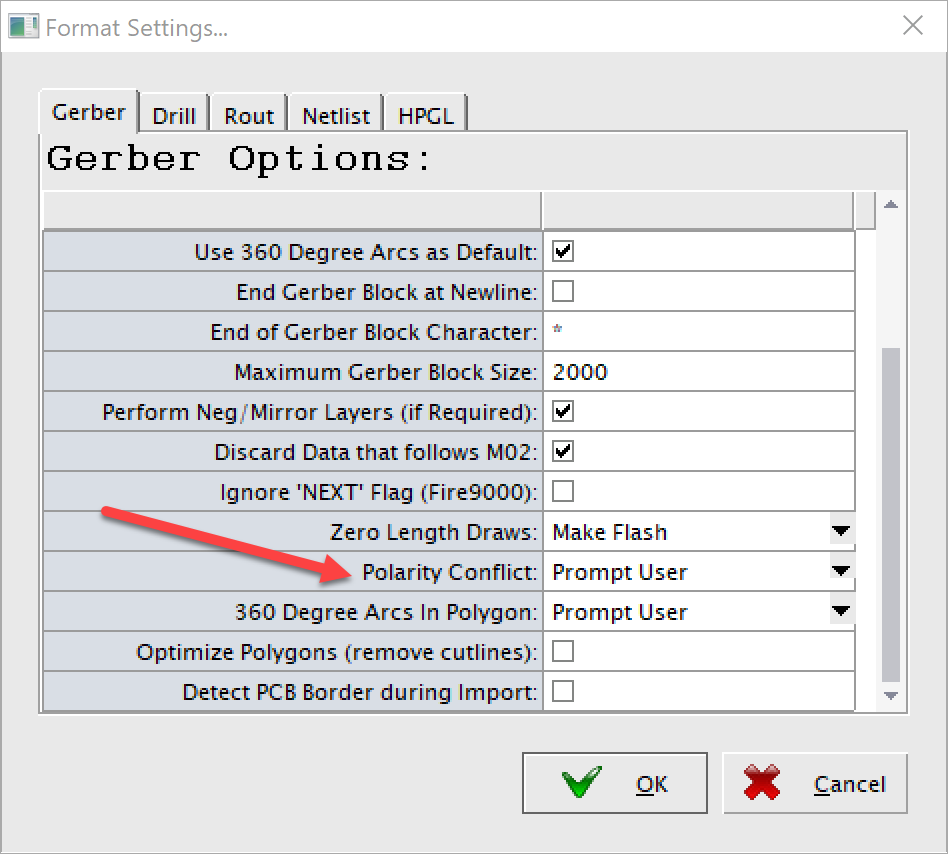 The default is "Ignore" and FAB 3000 will simply load the file exactly as it has been parsed.

During import a Prompt message will appear and ask whether you wish to change the layer polarity to align with the first Gerber object polarity.

If I take a positive image in Fab3000 and export it as a negative gerber, Fab3000 reverses IPPOS to IPNEG, but it doesn't reverse LPD to LPC.  That would seem to create the same conflict.  I do get the conflict message when I load the gerber.  Is that intended?

You actually should not export Gerber files with an IPNEG in the Header anymore - that's been depreciated by the latest Gerber File Specifications.

Note: We only keep it available for legacy purposes.

If you wish to reverse LPD to LPC, etc.  - then please use the command "Convert to Negative Layer"  (located in the Fabrication menu).  Film wizard can also generate negative layers  (reverse LPD to LPC).

Okay.  I'm trying to use Convert To Negative Layer.  I select the layer, select use border, and click OK.  It asks me if I want to generate a border layer, I choose yes.  Then it says select objects on the border, so I do.  Then nothing.  Nothing happens.  How do you make it work?

Thanks for your question.  When creating a Negative Layer you need to have some type of outer boundary - as the negative layer cannot extend to infinity.

If you select PCB border (for the boundary) and you're PCB border layer does not exist; or is not connected as a single entity -  FAB 3000 is trying to create one for you using your existing design.  For more information about generating PCB borders, please search generate border in our support center.   https://support.numericalinnovations.com/support/search?term=generate+border

I have a border layer but it won't use it.  It has name Border and it's defined as type border in the layer list. How do I get it to use that?

said over 3 years ago
"I have a border layer but it won't use it.  It has name Border and it's defined as type border in the layer list. How do I get it to use that?"
See: https://support.numericalinnovations.com/support/discussions/topics/14000006947